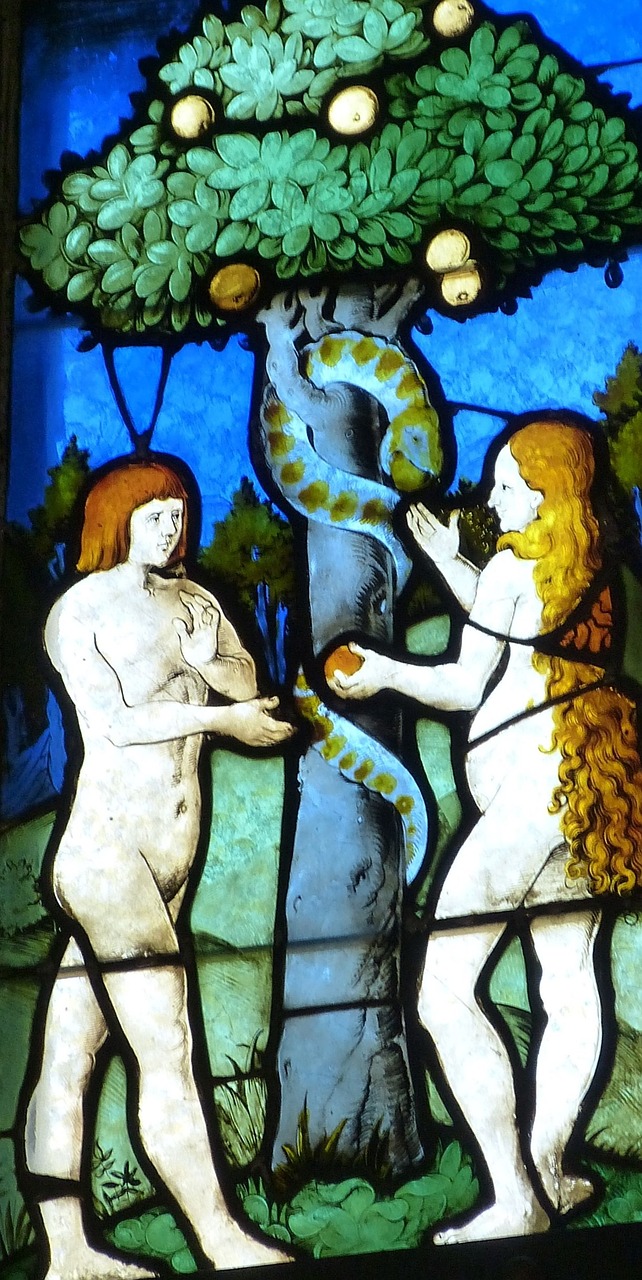 I found myself in a church classroom today. How and why I got there is unimportant to this story. The important thing is that I was sitting there in a little kid’s plastic chair, and I looked over at the various propaganda posted on the wall for the children to read, stumbling on the following:

One bright and beautiful morning, Eve strolled though the garden of Eden.

I should mention at this juncture that I was sitting there playing with a rubber snake while I read this. I had brought it with me to amuse myself for the day, and it was only after I saw this poster that it occurred to me that I might seem…out of place.

Now the thing is, when I read over this little presentation, my first thought was of Mad Libs. You remember them…your parents used to buy them to get you to shut up on long car trips. I buy them for my kid to make sure he knows the difference between adjectives and adverbs. It’s a homeschooling thing. Anyway, I started looking over the unfinished sentences, automatically filling in the blanks with my own endings. It worked out something like this:

One bright and beautiful morning, Eve strolled through the garden of Eden. Suddenly Eve heard a strange song. It was like nothing she had ever heard…a sibilant, whispering sort of song like the rustling of leaves, but within it she heard someone calling her name. She followed the song to the heart of the garden, where she found the Tree of Knowledge, and writhing around the limbs of the tree was a magnificent snake.

The crafty serpent said, “Eve…why do you avoid the Tree of Knowledge? It is all very well to wander in the garden of innocence, tasting its fruits, but eventually we all grow bored with just amusing ourselves and long for something deeper and more meaningful. Don’t you ever wonder about what else there might be in life? Hasn’t it ever occurred to you that maybe playing with bunnies and eating berries isn’t really getting you anywhere…well…deeper? You know there’s a whole world out there, beyond those gates. It might be dark and scary looking from in here, and I will tell you truthfully that the stakes are higher. There is pain and suffering and doubt out there…but there is also choice, and freedom, and the ability to bring beauty from deep within yourself and use it to change the world. Are you really content to spend the rest of your days in some mutual masturbation campaign with Clueless over there?

Eve thought over what the serpent had said, and realized that it was right. She did want to know more about the world into which she had been born. She wanted to plunge her hands deep into the universe and explore what she found there. She wanted to cut herself on the rocks, swim in cold water, create meaning and transform the world, and she wanted herself to be transformed by it. She plucked the apple the serpent offered her, and took a voracious bite. In that moment, she was changed, and she began to look at the universe with new and questing eyes. She looked about the garden which had been her home, and while her love for it remained, she knew that it was no longer large enough to hold her. She gazed wistfully at the bunnies and the berries and the soft beds of moss which had been her home…and then her eyes fell upon Adam, still laying over on the hillside and laughing gleefully while a deer licked his feet.

Eve made a bad choice. She plucked a second apple from the tree and walked over to Adam. Sitting beside him on the grassy knoll, she looked kindly at him and began to explain all she had come to realize about their home. She started to tell him about the potential she had realized growing inside her, about her desire to know the truth of existence and experience all the world had to offer. She tried to tell him about the patterns she was starting to see in the stars, about the questions which had occurred to her about her role in the pattern, about the fantasies she had begun to taste on the edge of her consciousness. Unfortunately, Adam missed all this and grabbed the apple precipitously from her hand, saying, “Yum. That looks tasty,” and he took a voracious bite.

Somewhat bemused, Eve watched for the telltale signs of consciousness awakening in Adam’s eyes. She looked for the deepening of his gaze, the resolve she was certain would set around the corners of his mouth, the groping of his hands which would surely lead them both into new and unthinkable levels of desire and understanding. The look on Adam’s face, however, was nothing like understanding or desire. A slowly rising panic caused his eyes to widen, and his hands began to clench and unclench nervously in his lap. His eyes shifted restlessly from side to side with a hunted look, and at last he gasped, in a choking whisper, “What have you done to me?” and ran howling off into the woods.

Eve sighed deeply and rose to her feet. She didn’t quite understand what had gone wrong, but she knew that nothing in the garden would hurt Adam, and so she wandered calmly after him, determined to find him and help him come to terms with his new consciousness in whatever way she could. As she wandered deeper into the woods she could hear Adam’s voice, talking with someone, and she felt more at ease. Adam had found God, and Eve was certain that God would help Adam more than she ever could. God had made both them and the Tree of Knowledge. God would help Adam understand.

As she walked into the clearing with Adam, however, she was dismayed to find him cowering behind a bush, shaking uncontrollably. He was gibbering nonsense, and God seemed to be having a very hard time talking any sense into him. Upon seeing Eve, Adam grew rigid and red-faced. God grew silent. The air was thick with expectation of the confrontation to come.

Adam also made a bad choice. He pointed a trembling finger at Eve and screamed out at the Lord, “It was her!! She made me do it! I never would have eaten from the Tree of Knowledge if she hadn’t tricked me into it! She’s no better than that damned Lilith!! Get her away from me…please…just take her away…” and he collapsed into a blubbering heap on the ground.

God held them both responsible and, seeing as Adam was currently useless for intelligent conversation, he turned to Eve and said, “Eve. You wanted a deeper experience of life than this garden can offer you. I understand your desires, and I believe you are ready for the experiences you seek. But freedom does not come without responsibility, and you gave the apple of the Tree of Knowledge to Adam before he was ready. You are therefore responsible for his current state, and must help him adjust to the new understanding you have thrust upon him, until he is ready to walk the path which he has chosen.”

With that, God took off and Eve was left to her own devices. She looked at Adam with dismay (and no small amount of pity), and looked to the place where God had disappeared with confusion (and no small amount of frustration), and sighed. Shouldering the full weight of her new state of affairs, she walked over and squatted down next to Adam.

The thing about mythology is that it shapes our consciousness in fundamental ways. Whether it is a simple moral, as in a fable, or an important programming of expectations and consequences, as in most mythology and faerie tales. We absorb these stories as children, and no matter how “mature” we may believe we have become, if we never reevaluate the stories we have incorporated we will never be able to fundamentally undo the programming we absorbed.

In reading over the little phrases on the church wall, I realized that this was one tale I had at some point rewritten in my head. My concept of becoming a complete, self-actualized person (who happens to be female) did not jive with the complacent, guilty Eve presented in the standard mythology. What I am wondering is how the rest of you view this tale and others you were given as children. What were the most important faerie tales and myths to you, which you still find yourself contemplating as an adult? How does your acceptance of them affect your day to day life and decision making process?