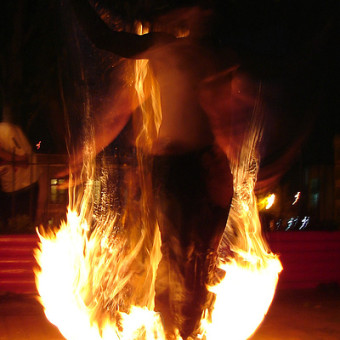 A great deal of emphasis is given in our stories to tales of magical creation. Wishes are granted, and the coveted item appears out of thin air. The birth of a child, in many religions, is the beginning of salvation. The creation of a building, or an artifact, or a concrete set of precepts is often the turning point where a tale of misery becomes a valuable lesson. As we go through our lives, working to live up to our own, personal, mythologies, we carry these lessons with us and aim to build and create that which will lead us to wisdom, happiness, and a sense of righteous fulfillment at the end of our time here.

Much less often is the power of death and destruction upheld as a step along this path. Usually, tales of death are only made meaningful when death is magically overcome, or serves the purpose of furthering a noble cause. Destruction is saved for the punishment of the guilty or as a catalyst for greater achievement. Something to be avoided at all costs, but if encountered, to be nobly borne and overcome. What we rarely hear are stories of the beauty and necessity of destruction as a meaningful, sacred thing in itself. The recognition that destruction is a crucial part of all our lives if we are to continue to grow, that death creates the fertile ground for new growth, seems to have been left behind with the harvest festivals and strange, heathen temples of the east. We are a people of creation and building; we never look back. We just continue to build up and out on the basis of what came before. But what if our foundation was built so long ago that the core is rotten? Can we continue to build external supports indefinitely, attempting to shore up that which wants to fall?

Sometimes, we must take an aspect of our lives down to nothing in order to be able to build something that is meaningful to us now in its place. It might be something as small as throwing away everything in the refrigerator (how much of that stuff is actually edible, anymore?), or perhaps something bigger like throwing out the ‘fridge altogether. It could be that it’s a relationship you have been limping along for ages, telling yourself it will one day be good again, or it could be that you really, really need to move. To another country.

In Hindu mythology, the goddess Kali is viewed as the essential energy of all things. She is also the slayer of demons, the great destructor. At first glance, she can appear fearsome, with her fangs and lolling tongue, her necklace of human heads and her weapons. But looking deeper into her meaning, we find that first impressions can be misleading. The symbolism of Kali is that of overcoming the various traps we set for ourselves, both in the material and mental worlds. She is often presented to us posed in the midst of a wild dance, caught up in the joy of fulfilling her destructive purpose. Kali is the release you feel when burning old love letters or rejection notices, the rush of energy we experience when we throw out the ragged couch and stare at the empty space we have left.

Continuing to build without considering what needs to go can only lead to a cluttered life, a cluttered psyche. Your neighbors may look a little alarmed when they see the bonfire in your backyard, your friends may be appalled when they come over to an empty apartment, but you will move forward much freer in spirit for not carrying all your baggage with you. If it is no longer useful to you, if it only drags you down, let it go.

At the end of the year, we often come to a point where we reevaluate the progress we have made thus far, consider what we want to build in the new year. For a few moments, though, I ask you to contemplate this: What do you want to destroy?